The Butler MR-24® Roof System Wind Uplift Testing ensures that our metal roof is durable and able to withstand pressure from high winds. To be exact, the MR-24® roof system is prepared to withstand winds of approximately 120 or 200 miles per hour and pressure of 45 to 105 pounds. In a Wind Uplifting test, there are three levels of performance a roof can achieve. The baseline is the UL Class 30, the middle listing is the UL Class 60, and the highest industry rating is the UL Class 90. When installed in its standard configuration, the MR-24® roof is rated at the UL Class 90 level. The MR-24® Roof System is the industry’s first and finest standing-seam metal roof system with more than 50 years of proven in-place weathertight performance. 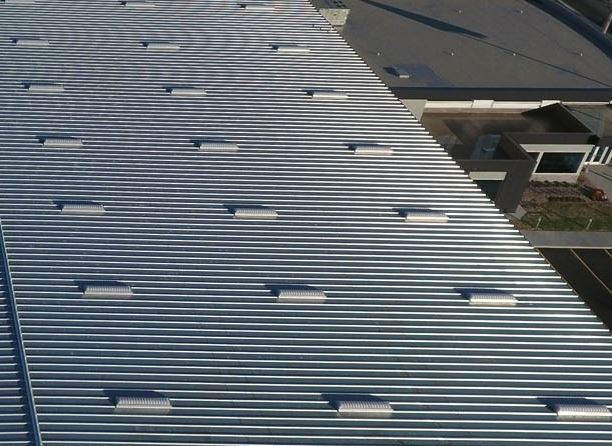 Roof system classifications begin at a UL Class 30. In this Class, the uplift pressure the roof has to resist is approximately 45 pounds per square foot. This is the same pressure achieved by a 120 mile per hour wind. Although that seems very high, that is just taking the horizontal wind into account. The wind blowing into the side of the building moves up to the top as well, creating a force around the perimeter of the building. This 45 pounds of pressure can actually be achieved at lower wind speed.

The UL Class 60 would be the next level. This Class tests at an uplift pressure of approximately 75 pounds per square foot. During this phase, Butler testing also runs a cyclic phase to simulate changing pressures and dusting that commonly occur with winds at this speed.

Lastly, a UL Class 90 tests at approximately 105 pounds per square foot. This is equivalent to a 200 mile per hour wind pressure. During this portion of the test, the Butler MR-24 roof system’s seams do not come apart. If any kinks occur, there is still a weather-tight membrane inside of the building. Typically, under this pressure, roof seams from other manufacturers would loosen and allow air to flow. The Butler MR-24 Roof system, however, remains airtight, watertight, and returns back to its original configuration.

In addition to the wind uplift, Butler also tests a variety of other standards such as projectile penetration testing which is important in Dade county Florida and other high-wind locations.

The video below is a demonstration of the wind uplift tests on the Butler MR-24 roof. The test is performed on a 10 square foot section of the roof. It starts by evacuating the air on the top side of the roof and then lets the atmospheric pressure push on the bottom side. This creates an uplift form which is then measured. The video demonstrates how the MR-24 roof performs throughout each level showing winds speeds and their effects at 120 miles per hour through 200 miles per hour. It is impressive and is unmatched in the industry. If you have any questions, please contact us.

Watch the video below: